Magic Bubble 魔術泡泡, also known as Bubble Bath Babes, Soap Panic, and Mermaids of Atlantis is an original puzzle game developed and published by Computer & Entertainment in 1991. The game mechanics are similar to Tetris, but unlike most other Tetris clones, this one tries to differ from it.

In this game, you must manage the bubbles in a way to connect 4 (or more) of them with the same color. The pieces which are composed of 4 connected bubbles of various colors, go up to the top of the screen (which is the reverse of Tetris). Some bubbles have a letter in them. Once you got all the letter which compose the word "Magic", you get the Magic Bubble.

When you beat a stage, you are awarded with some Japanese text and a picture of a woman, each stage losing more clothes (Fully dressed -> underwear -> nude). Once you've went through the 3 states for a girl, the game will reward you with a new one, which will go under the same process. There are 12 stages, which means that you'll see 4 different girls.

This game has a simultaneous 2-players mode. The option menu (which appears automatically after the title screen) let you choose the stage you want to start in, the type of game (Type A starts you off with an empty stage, while Type B starts you with two rows of bubbles already on the screen), between 5 levels of speed (in level 5, the pieces fall as fast as when you press up) and 3 different background musics (only 2 in Soap Panic and Bubble Bath Babes).

Front of the Manual 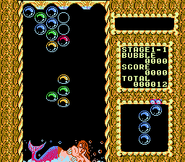 A screenshot of Mermaids of Atlantis's gameplay.
Community content is available under CC-BY-SA unless otherwise noted.
Advertisement