The game is one of several mahjong solitaire games released by Sachen. In the game the player(s) tackle six difficulty levels with three levels in each that reward their own set of adult images upon completion of each stage. The game's notable in that it features voice clips (although low quality) and is very difficult, partially due to the lackluster programming.

There's a two-player mode in the game where if a connection isn't made in time, a sound clip will play and the other player will take control. This is probably the best way to tackle the game, considering how complex the puzzles get.

Complete copy of the Hacker release. 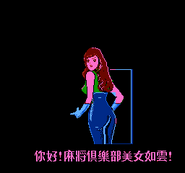 A win image from the Joy Van release. 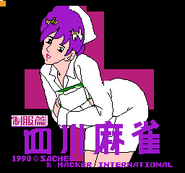 Title screen of the Hacker release. 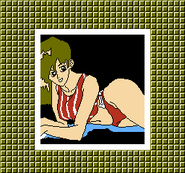 A win image from the Hacker release.

Advertisement for Mahjong Trap that can be found on the back of Joy Van/Sachen carts.
Add a photo to this gallery

Retrieved from "https://bootleggames.fandom.com/wiki/Mahjong_Trap?oldid=31791"
Community content is available under CC-BY-SA unless otherwise noted.