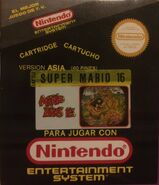 This is pretty much just the Joe & Mac cover art, but with Mario's head from Mario Bros pasted on top.
Add a photo to this gallery

Retrieved from "https://bootleggames.fandom.com/wiki/Mario_16?oldid=38630"
Community content is available under CC-BY-SA unless otherwise noted.