Menace Beach is a game originally released for the NES by Color Dreams in 1990. This game is one of Color Dreams' more notorious games. It is overall a platformer with sometime a beat'em all objective. It was later adapted for a Christian audience as Sunday Funday.

According to the game's instruction manual, the player controls Scooter, a skateboarding hero whose girlfriend, Bunny, has been kidnapped by Demon Dan. The intro screen shows a shackled Bunny pleading for the player's help. The cutscenes that appear after most levels are infamous for Bunny's clothes rotting away while she insults Scooter.

During the game, Scooter uses his skateboard to ride across levels. Pressing A makes you jump while pressing B allows you to either punch on the ground or spin in the air. In the air, you can do mid-air hops by pressing A. Even though you descend more, this can be used to cross wide pits. You can also pick up items off the ground and then toss them using B. Scooter starts off with 9 health points (with each heart representing three) and these can be increased even farther.

The objective is to get to the end of the level while beating up various enemies along the way. The level themes are mostly composed of towns, sewers and beaches; with the final level taking place in a cave.

The most basic enemies consists of ninjas (named Wan Ka Pow in the manual), Elvis impersonators (Pelvis) and surfers (Hike). These three can be taken out in three attacks or can instantly die to any item thrown at them. There's also clowns (Zobo) that drop bombs down but will die in one hit to anything. Once they're defeated, they drop their balloons which can be used to fly up. (In some levels, it's crucial to obtain a balloon from them). There's also people randomly tossing items to you from either covers or windows such as bottles, pipes and bombs (which you can use to pick up once they stop moving), bananas (which cause Scooter to slip), balloons, or kisses (which causes Scooter to lose control). In later levels, sumo wrestlers (Suki Yashi) appear which can't be defeated unless you blow them up somehow whether it's through a mine or a tossed bomb. The sewer levels contain frogs (Froggy) which cause Scooter to jump, light switches which can turn the light on or off in the stage, springs, and mines that blows up after a while when you step on them. The beaches also have seagulls (Swooper The Bird) which can drag you back to part of the level. The only boss in the game is Demon Dan in the final level; he proceeds to throw fireballs at you and the only way to hurt him is to jump on the ground, causing a spike from the ceiling to fall on top of him. 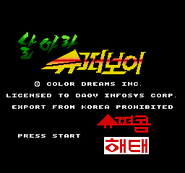 Korean title screen
Add a photo to this gallery

This hack changes the majority of the graphics. Scooter has been changed to "Miss Peach", a woman with a white dress who is based on Marilyn Monroe. Demon Dan is now Janky Takamitsu, a mad scientist with a syringe. All of the other enemies and objects have been changed. For example, Wan Ka Pow is now a mafia member known as Maron Brond and Pelvis becoming a tribal person known as Mr. Sankon. The majority of the music has been changed to a track from AV Dragon Mahjong. The cutscenes are also changed to two girls with their clothes rotting away between levels, eventually becoming nude. The text for the cutscenes are all in Japanese but oddly enough, it's written out in rōmaji. This is possibly due to Color Dreams not willing to implement the Japanese alphabet.

The plot and overall presentation is notably inconsistent between the cutscenes, the gameplay and the box. The box states Miss Peach is a Los Angeles cop who has to save a girl from a monster known as Okottendo. On the box, she's depicted as Princess Peach but in-game, she's based more on Marilyn Monroe. Also, Okottendo is referred to as a kaiju-like monster which in-game, is the replacement for Suki Yashi and not the final boss. The box art also shows Pelvis and the original fire hydrant design despite the fact they were all changed in-game. The most puzzling thing is the cutscenes; they all seem to refer to a character known as Assy who is cheating on his girlfriend (a pink-haired girl) with a blue-haired girl. Meanwhile, his girlfriend gets suspicious. The ending has his girlfriend finding out Assy cheated on her and ends up breaking up with her. The cutscenes still mention Demon Dan's name as well.

A prototype version of the game has been discovered that's titled Mr. Assy. The only thing known about the game is that the cutscenes remain the same as they did in Miss. Peach World (which explains the Assy name within Miss. Peach World) and there is a new title screen instead. Given the game's title, it's presumed that Scooter remains the same or is slightly edited here. If Miss Peach World's cutscenes still mentioning Demon Dan is anything to go by, it might also mean Demon Dan and thus, the rest of the enemies and objects remaining the same. It's presumed this is the initial version sent to Hacker International but they wanted the game to be changed up even more. Miss. Peach World's inconsistencies could also have been the result of miscommunication between Hacker International and Color Dreams while developing both versions.

Sunday Funday is a Christian-themed hack done in 1994 and was released on the Sunday Funday: The Ride multicart in 1995 under the Wisdom Tree name. The hack itself is a graphical overhaul to make itself much more family-friendly and Christianity-themed compared to the original game. (although it's notorious for the fact that despite the changes, people regard the hack to be quite violent for its theme)

The hack changes up the plot of the game to where Scooter (Despite looking the same, he is never referred to by his name even in the manual) has to make it to church on his skateboard. Scooter himself has been edited to hold a bible and his punch attack was changed to him spinning his skateboard (like his original attack when preformed in the air). The cutscenes are now a Sunday school teacher telling Scooter to make it to school while also giving hints. Many of the enemies have been changed to resemble more common civilians and defeating enemies will cause a Holy Spirit to emerge from them (with the exception of the clown enemy). Demon Dan himself has been changed to a bear and the cave palette has been edited to less resemble hell. The game also gives you the ability to toggle music on or off on the main menu.

Retrieved from "https://bootleggames.fandom.com/wiki/Menace_Beach?oldid=40612"
Community content is available under CC-BY-SA unless otherwise noted.