The Nanica Smitch is a Famiclone modeled after the Nintendo Switch released in 2019 by Nanica Station. It contains 800 games, including Pac-Mania and Super Mario Bros. 3; the rest of the game list is unknown. Like the Switch, the Smitch can be played on the TV or as a handheld. Also, the controllers can be used in multiple positions.

The Smitch can arguably be considered a scam, as its design is almost identical to the device it's ripping off, (even closer than consoles such as the POP Station and Vii) and is clearly intended to fool people into believing it's an official Nintendo product.

The Smitch when compared to the box. 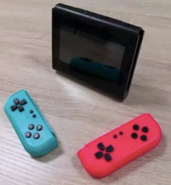 The Smitch with its controllers detached.

The Nanica Smitch.
Add a photo to this gallery
Retrieved from "https://bootleggames.fandom.com/wiki/Nanica_Smitch?oldid=41081"
Community content is available under CC-BY-SA unless otherwise noted.