BootlegGames Wiki
Register
Don't have an account?
Sign In
Advertisement
in: Companies, Companies from Japan, Publishers,
and 6 more

The activity started in 1970. In the latter half of 1970, Konami's Piccadilly Circus copy game, Piccadilly Circuit, was released, and in 1978, Atari's Breakout copy game[1], Taito's Space Invaders copy game, Moon Base[2], and Namco's Galaxian. Released a copy game of Moon Alien[3], which became a litigation issue,as well as using copyrighted characters on their game advertisements without permission by the original companies.

President and CEO. Sueharu Torii He founded a company at the age of 23. 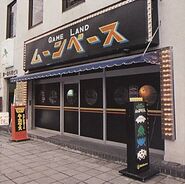 Nichibutsu's official Amusement arcade, which uses Taito's Space Invaders characters in the signboard advertisement of the store without permission.

Moon Trek has Star Trek appear in the game content and posters without permission.

THE LADY HUNTER has Batman appear in the game content and posters without permission.

Mahjong Shikaku uses many Japanese anime characters without permission, such as Nausicaa from Nausicaa of the Valley of the Wind.

Nichibutsu did not stop plagiarism until he withdrew from the game business. As an example, Nichibutsu's Deadheat Road uses Taito's Dangerous Curves design.