One Day of Mr. Potato, also known as Mr. Onion and Hero Spud, is a puzzle-platforming game released by JungleTac sometime in the 2000s. Originally released on VT09-based plug 'n plays, it was later ported to VT3xx, Game Boy Advance, and Sunplus hardware.

The player controls Mr. Potato, a character with a striking resemblance to Kirby, and must collect the keys in order to unlock the cage holding his girlfriend. Mr. Potato cannot jump - he must use ladders to climb upward. He can attack enemy onions by shooting out of his mouth. After unlocking the cage, the game moves on to the next level.

These newer versions of the game, both titled Mr. Onion, feature overhauled graphics, music and mechanics. While the first level is the same as the original, the levels following it are unique. The player can now take fall damage, which wasn't present in the original. The enemy AI is slightly more forgiving.

A hack of Mr. Potato was released titled Defender, which replaced Mr. Potato with a purple-haired girl and changes the level environments. A Sega Genesis game titled Adventure in the Park is a very poor clone of Mr. Potato, seemingly without JungleTac's involvement. 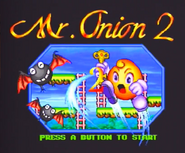 Mr. Onion 2's title screen.
Add a photo to this gallery
Retrieved from "https://bootleggames.fandom.com/wiki/One_Day_of_Mr._Potato?oldid=40728"
Community content is available under CC-BY-SA unless otherwise noted.