Operation Secret Storm is an unlicensed action-oriented NES game by Color Dreams where you control a secret agent named George whose main goal is to defeat the infamous dictator Saddam Hussein and his men. 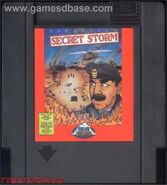