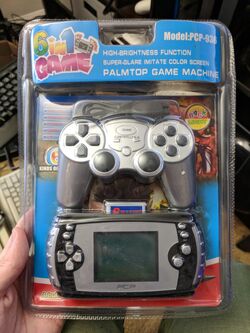 The PCP-936 6 in 1 GAME is a clone of TimeTop's "Game King" handheld. It comes with a cartridge that resembles a Game Boy Advance cartridge. The cartridge claims to contain the games, though the games are built in and the cartridge just lets the system play them. The system has a backlight, an extra controller, and loosely resembles a PlayStation Portable.

Some versions of the game came with an additional thin paper manual in addition to the cardboard backing. Since it is stashed away behind the device in the packaging, it cannot be determined prior to opening the package if the consumer has purchased that version.

On the control layout on the English side of the cardboard instructions, Tank, F1-2010, and Risk King are left out and there are controls instead for "Sea-Wolf", "Apache", and "Motor" - games that were on the PCP-926 LTPS Handy Game PCP Station, but not here. The Chinese side retains these games' controls. 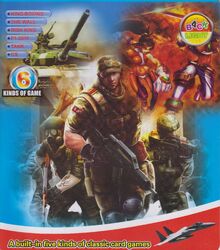 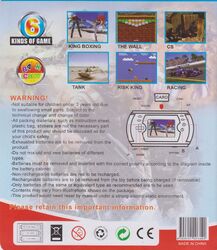