Panda Adventure is a pirate platform game released by ABAB Soft on the 4-in-1 Super Cool Boy (CB-4034) multicarts.

Panda Adventure is a simple single-screen platformer. You control a panda which must make its way from one side of the screen to the other.

Enemies include birds (which resemble, but are not completely identical to, the ones in Earthworm Jim 3, and are very hard to kill) and various ground-based enemies which can be defeated by jumping on them. Some screens include a pit which must be jumped over, sometimes with the assistance of a moving platform.

There are four different types of level, but the game does not appear to have any boss or ending, and just loops when you complete all the levels.

The game uses Hummer Team's sound engine and has two music tracks (plus a short Game Over tune), one of which is based on the same tune as a track from Sachen's World of Card Games, although it is unknown if Sachen's game is the original source. However, it is much simpler than many of Hummer Team's previous games.

Rings is a hack of Panda Adventure by Hummer Team that's based on Lord of the Rings. Its only known appearance was when it appeared on Super New Year Cart 15-in-1 under different names (Gorge, Peace Sea, The Bridge, Green Evil) as well as its hack Pink Jelly but it has also appeared on ABAB Soft's website as a multicart. The name was derived from uncompiled source code found within Super New Year Cart 15-in-1's ROM.

Although the gameplay has remained the same, one notable thing is that there's a character select where you can choose between 4 characters who look similar to Frodo, Legolas, Gandalf and Arwen but they all control the same. Almost all the environments for the levels are all the same but recolored and the original bamboo environment from Panda Adventure is now a cave using graphics from Donkey Kong Country 4. The enemies have also changed; the bobcat and bird enemies were completely rehauled graphically while the fox has been recolored. The game also has new music, complete with the Donkey Kong Country 4 fanfare playing every time you reach the end of the screen. 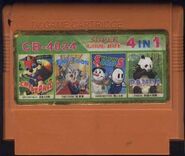 The super cool boy 4 in 1, that has panda adventure on it (original version).

The power joy navigator cartridge, another multicart that has panda adventure on it.

The 15 in 1 multicart , that has rings and pink jelly.
Add a photo to this gallery

Retrieved from "https://bootleggames.fandom.com/wiki/Panda_Adventure?oldid=36311"
Community content is available under CC-BY-SA unless otherwise noted.