The Pikachu on the front of the box notably has an odd, white symbol on its head, a tail unlike Pikachu's and more akin to Raichu's, and a Star-Spangled Banner shirt.

The PikaGame comes with its own cartridge. Despite the sticker claiming it to be a "7-in-1", the in-game title says "Super 500 in 1". Indeed, however, only seven games are listed in available photos. Although, there is a probable chance there are more games beyond seven, as a Japanese blog poster writes about the console's games:

The list of games that are known in this cart as they are listed are:

The contents inside the PikaGame box are prone to changing based on what iteration you buy. While the core is the same—two controllers, a toy gun, a cartridge and the console itself—the labeling on the cartridge itself varies, and some fail to supply a VCD.

In the East, PikaGame has gained the nickname "adokiouka" through its use of butchered Japanese. The text which spawned the name and moreover is present on every version of the PikaGame box is typically placed right below the logo. Spelled ぁどきおウか, it is complete gibberish and holds no meaning. Likewise, the text on the bottom of the box reads:

Which, besides the word "PRIMA", is gibberish. The lower half on the back transcribed is much of the same.

It lists the release date however, that being 2001.

The existence of PikáGame2 (PikaGame2), while confirmed, is much harder to come by. Very few images of its existence are available, but one can be found on a Thai e-marketplace. Many of the contents remain unchanged, save for a new artwork on the box. The Famiclone includes two cartridges, as opposed to PikaGame's one, and the controllers have been modified slightly. It comes with its own 7-in-1 cartridge, although the contents of it remain unknown.

A more detailed alternative cover for the PikaGame box.

The PikaGame 7-in-1 cartridge inserted onto the console.

Another PikaGame box with mild variations and an orange coloring.

A PikaGame box sporting new artwork and featuring a analog controller. "PikaGame2" can be seen in the back.

PikaGame as listed on a Thai marketplace. This iteration sports analog, more akin to the PS2. 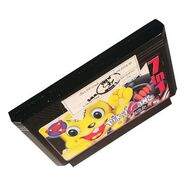