Pindale Crystal Ball has a VT03 port called Worm Dream, which stars a worm instead of Nature Clan.

Nature Clan has to collect every green circle in a stage and then head to the exit (indicated by a flashing circle). Nature Clan starts with three lives, and he has to avoid spiky objects or else he loses a life. Different types of spiky objects appear in the later levels (the small, purple spiky ones are the most common).

Additionally, every stage has a timer, which starts at 999 and decreases by a number every half-second. Nature Clan must complete the stage before it runs out.

There are two versions of Pindale Crystal Ball: one of them allows the player to select between 1-player and 2-player from the title screen. The other version removes both options, and the player is forced to do single-player mode.

Adventurer is a hack of Pindable Crystal Ball. The hack entirely redid the game, with new stage designs, different enemies, and a new playable character, who has to collect hearts instead of green spheres. 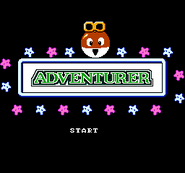 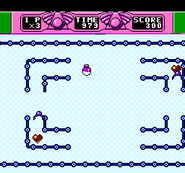 Gameplay of Adventurer.
Community content is available under CC-BY-SA unless otherwise noted.
Advertisement