Play Vision Portable (PVP) is the name of a series an NES-On-a-Chip (NOAC) Famiclones and other clone consoles that resemble a PlayStation Portable (PSP), made by a company called Touch Game Player.

The first revision of the PVP was released around 2011. The console was an NES clone with built-in games, some of which were contained on a proprietary cartridge (which was designed to resemble a Game Boy Advance game). PVP carts only trigger a switch for their original console, similar to the N-Joypad, and when they are placed in other revisions they will not run the intended menu; however, some models intentionally do not include a cartridge they are capable of running, so they can be rebranded as different units later. If a cartridge containing the necessary pins is put inside, another list can potentially run. It has a rechargeable battery and, depending on the unit, uses either a Game Boy Advance SP charger or a USB charger.

Many different models of the PVP exist, and they are somewhat hard to distinguish from each other. Even systems that share the same name and box art can have a different game list, or potentially be based on an entirely different console platform. Quality can also vary between models, with several featuring problems such as incorrect screen sizes (leading to the graphics looking squashed) and charger malfunctions.

A later model, the PVP 2, is a Mega Drive/Sega Genesis clone. They are likely based on AtGames systems, as the sound is off-pitch. This can further be pointed to by the included version of Sonic the Hedgehog, which starts on Scrap Brain Zone Act 2, as does a repeat on an AtGames Plug 'N Play.

There is also a PVP 3, which is another Genesis-based console. This system is more commonly known as the PXP, as it says on the main unit, and only the outer packaging refers to it under the PVP name.

A system called the PVP Crash 9 is based on VT03 hardware (although this is menu only, the included games are standard NES) and uses different cartridges. This variation is sometimes referred to as the PVP Station Light.

Another variation is known as simply the PVP Game. This variation is in a differently shaped shell that somewhat resembles a Game Boy Advance. This console is the only version of the PVP to feature a truthful game list of 168 games, as all other models feature exaggerated menu items.

An educational device known as the PVP Wish Game features a completely different design - it is flat and resembles a schoolbus, and features a keyboard. Most of its contents are unknown, but it seems to feature mostly Nice Code games.

NES-based systems will often feature intro sequences, often based on media unrelated to the unit in question. These include Gangnam Style, What Does the Fox Say, Angry Birds, and one combining both Super Mario Bros. and Felix the Cat. Genesis-based units do not feature these, presumably to save space. The menus will often feature preview images for each game, although earlier units do not have this feature.

Example of an intro
Add a photo to this gallery

Due to the many PVP models, not every title can be documented, but here's a list of some more common and/or interesting titles:

Hacks made by Touch Game Player

PVP box. This model is believed to be the first version. (NES-based)
Download (1).jpg
The PVP console and it's included contents. 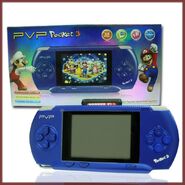 PVP Pocket 3. Its contents are unknown. The M on Mario's hat is a W for whatever reason.

PVP Wish Game (non-educational). Appears to feature a picture of a furry Crash Bandicoot. (NES-based)
Add a photo to this gallery
Retrieved from "https://bootleggames.fandom.com/wiki/Play_Vision_Portable_(PVP)?oldid=25770"
Community content is available under CC-BY-SA unless otherwise noted.