Pocahontas Part 2 is a bootleg Famicom port of Disney's Pocahontas. It was developed by Super Game and published by Realtec in 1997.

Like the original game, you control both Pocahontas herself and Meeko. Both of them can jump with A and Select allows you to switch between both characters. Pocahontas can interact with certain animals with B (However, she's unable to interact while crouching like in the original.) Comparatively, Pocahontas can climb up cliffs and walk around in shallow water but her jumping is limited and she can actually get hurt. Meeko is unable to take damage, jump better and can climb certain trees but is unable to cross any body of water. Pocahontas can also learn abilities along the way by collecting animal spirits, which involve helping out certain animals:

While the owl spirit is collectable, it has no actual effect in this port whereas in the original game, it was to illuminate dark areas. The fish spirit was omitted despite showing up when viewing spirits. (It may have been eliminated due to the fact it's not required to beat the game with it.)

Pocahontas doesn't have a health meter in this port, meaning if she takes any fall damage she basically dies and requires the level to restart all over. The only collectables that remain are the feathers and the berries which Meeko collect. The necklaces are missing, most likely due to the fact they're only required to unlock the special ending (which does not exist in this port). Passwords have also been cut from the game, requiring you to beat it in one full playthrough.

The levels have remained mostly intact although certain major elements have been cut. The second level loses the village portion as well as an area involving climbing up Grandma Willow to see the ships arriving. The third level also omits the settlers' camp, which in turn makes it so Pocahontas has to search for John Smith without the battle starting. Certain other minor level elements have also been changed around, either due to space or time restraints:

The graphics are all based on the original game although with choppier animations and some details being dropped. There's also several moments where you can see part of the background graphics ending abruptly such as the cutscene after the second level, where Pocahontas and John Smith approach the cliff and the trees are cut off at the top. Most of the cutscenes have remained, with only level 2's intermission cutscene being turned into text at the end of level 1. The ending only consists of a dialogue box appearing after reaching Powhatan, saying "Congratulations! You have prevented the war!" before the game resets. The music remains the same although played at a faster tempo. Strangely enough, the intro to level 1 plays the Savages track instead of being completely silent. 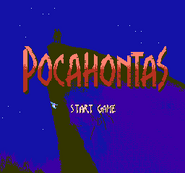