Pocket Monster is a NES platformer featuring Pikachu. It was also ported to the Game Boy Advance under the name Pokémon Gold Version.

This is a simple platformer, in which the player controls Pikachu. Compared to many other NES games, the controls are inverted, which means that jumping is done by pressing B, and pressing A while moving in a direction makes Pikachu run, and A on its' own clears every enemy on the screen. It's also possible to stomp on enemies, similarly to Super Mario Bros.. Pikachu can take three hits before losing a life, with the number of hits left represented by a Poké Ball counter on the top left corner of the screen. There are a total of four worlds (Velbt, Woods, Tableland, and Motte) which are split into three levels each, as well as a single-screen boss battle at the end of each. This game has a debug mode enabled by default, allowing the player free movement while paused and to skip to the next level by pressing Select. In some places, the player can fall partway into the ground, although this doesn't have any implications. The music also glitches slightly at certain points.

The background graphics are mostly ripped and slightly modified from Athena and Adventure Island II. Some of the enemies are also taken from various games, with some of them based on Pokémon. The sound engine was taken from Twin Bee, a game published and developed by Konami, and, while the game has a soundtrack of its' own, all the sound effects are still recognizably from Twin Bee - a setup similar to what Super Game and Gamtec used to have. The ending is Pikachu dancing with an "End" message at the top of the screen.

This game was later hacked to make Panda World, which plays very similarly aside from different level layouts and the electric shock attack being replaced with the ability to throw snowballs, of which the player has a limited amount. Instead of Pikachu, the player controls a Tarepanda and this time around the debug mode now requires a cheat code to activate. Some of the background graphics are ripped from Mega Man 6.

Another hack of this game was made, called Super Pocket Monster, which is only known to exist on a 76-in-1 multicart. The rest of the game is the same as the original.

A hack based on the BBC children's series Teletubbies, where you play as Po (erroneously referred to as Popo) going through levels to collect items for the other Teletubbies. It is only known to exist on 150 in 1 Real Game and on a 401 in 1 console by Orb Gaming, which also features Pocket Monster and Panda World. 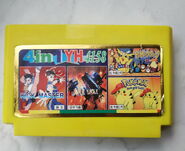 Pocket Monster and Pokémon 2 in a 4-in-1 cartridge. 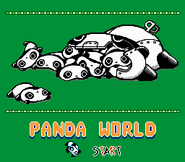 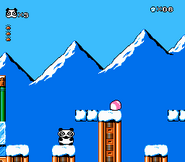 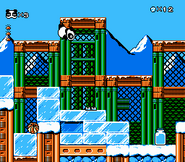 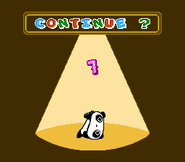 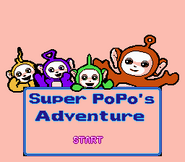 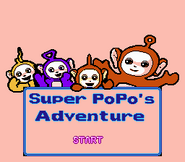 Ditto, but Dipsy is red. 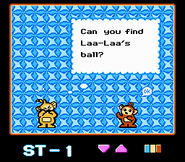 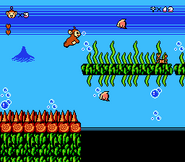 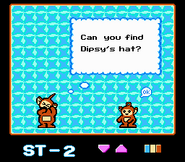 Dipsy's stage, replaced by PoPo's main palette due to a bug. 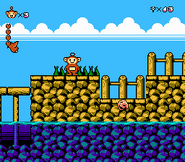 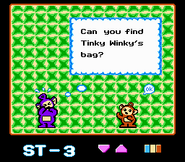 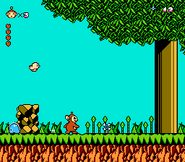 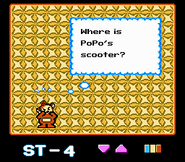 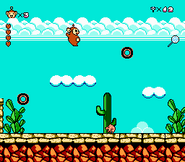 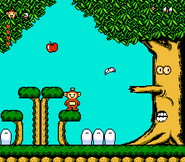 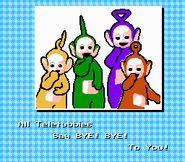