The main character is initially Pichu, but evolves into Pikachu and then Raichu, although its sprite on the map screen is always Pikachu. As you progress through the game you recruit other Pokémon to your cause to a total of 20, four of each type. Those types are celerity, balance, strength, super power and defense, which roughly correspond to electric/flying, water/grass, fighting/fire, psychic/normal, rock/ground types in the original games, each type being strong against the next one.

Every Pokémon gets a chance to learn a new skill at these three intervals; level 5 to level 10, level 15 to level 20, and level 30 to level 35. Learning a new skill is guaranteed at the end of the interval if the Pokemon failed to learn it at previous five levels.

For the Pokémon that evolve only once, they already have their first two skills when recruited. Their third skill comes with their first and only evolution, and fourth skill requires level up in their evolved form. Since the last skill-learning interval is level 30 to 35, evolving these Pokémon at level 35 or higher will prevent them from learning the fourth skill. If a Pokemon is evolved before learning their pre-evolution only skills, that Pokemon will end up having less than four skills.

All text in the game is written in English, albeit poorly translated (though usually at least understandable) and with no concern for line breaks - text simply wraps in the middle of the word. The introductory text is a good example of what to expect in this game:

"After winning the long-time lost Improbity Badge, the Rocket Brigade barbarically destroy the peace of Magic Baby's world, even more they crazily loot previous Magic Baby. Being aware of this, Xiaozhi and his pals decide to stop their devilry but only to be imprisoned.

Can they really get out of all these problem in a whole skin?"

Most Pokemon names appear to be either romanised or literally translated from their Chinese names, which are themselves based on the Japanese names, leading to names such as "Qutstanding nuntortoise" (Squirtle), "armordigimon" (Rhydon) & "Strongbear" (Feraligatr). Some Pokemon even have the same names; for example, both Charmeleon and Charizard are named "Firedragon". The only two correctly named are Pikachu and Latias. "Pokemon" and "Pocket Monsters" are also extremely rarely used in dialogue, usually replaced by "Magic Baby".

Another version of this game, released by Sintax, is titled Pocket Monster Ruby on the title screen and 2003 Pocket Monster Carbuncle on the packaging. The title screen and stage graphics are different, but everything else appears to be identical.[1] Two further games listed on Sintax's website, called Digimom Sapphii and Digimon Crystal II, appear to recycle at least the storyline of this game, although in the latter case with Digimon characters and better English.[2]

While the alternate Ruby / Carbuncle version was released by Sintax, the Saphire version does not feature any Sintax logos or copyrights either in-game or on the packaging (or any others, aside from those on the box stolen from Croc 2), so it may have been published by another company. This unknown company may also have published Rockman Zero, a version of Vast Fame's Zook Hero 2[3], based on both games' "New Game Color Advance" logo. It was presumably released before the US version of the real Pokémon Sapphire, as its box art is based on a pre-release version with RP (Rating Pending) ESRB rating. 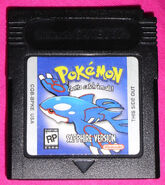 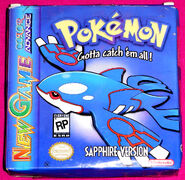 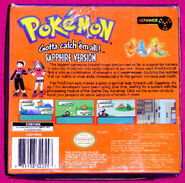