This article is about Pocket Monsters Stadium King of Fighters (Bronze). For games with a similar title, see Pocket Monster (disambiguation).

Pocket Monsters Stadium King of Fighters (Bronze) (Chinese title: 怪物競技格鬥王(銅)) is a currently undumped game for the Game Boy Color centered around the Pokémon franchise. It is currently unknown if this game is a hack of an official game or if it was built from the ground up.

The game starts off with Pikachu and friends walking in a forest setting, the graphics being stolen from Pokémon Red and Blue. Another group of Pokémon kidnap one of Pikachu's friends, leading him and his friends to set out to rescue them.

The game is a turn based rpg, though unlike regular Pokémon games the characters appear on the same plane side by side. Each character has a set of attacks that match the regular attributes of the Pokémon in the official games, and you can switch Pokémon during battle. A little bar at each player's side of the screen keeps rising then resetting back to its starting position when it is their turn, and depending on if you press A when the bar is at its peak, your attacks will be stronger. However, each attack has a set amount of usage points, and once your character has used up all these points you can not restore them. In addition, any moves in general will cause a second "skill" bar to go down, and once its reached its bottom, the player can not attack anymore unless they restore the bar by taking a turn out to replenish it.

The game's basic setup is watching a small playout of events and then your team ending up in battle with the group of Pokémon involved in your friends kidnapping. In each new area you typically come across a new Pokémon that decides to join your team. After each battle and another small cinematic, a map comes up of what resembles a world map, and a small plane leaves a trail from your current location up to your new location. 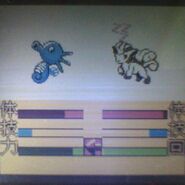 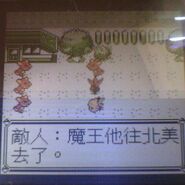 What appears to be a story sequence