The intro in the game features screenshots of specific Pokémon entries from Pokémon Gold's Japanese Pokédex, complete with the actual Japanese descriptions for each. The borders changes with each entry as each screen is a four-color BG image instead of being comprised of various sprites and BGs like in the official Pokédex from Pokémon Gold, Pokémon Silver and Pokémon Crystal.

Pokémon Adventure is a 2-D platformer that plays similar to Sonic Adventure 7. Unlike its original hack, you play as a poorly drawn Pikachu, jumping over enemies and collecting Pokéballs, which have replaced rings but still share the same role. Pikachu controls and attacks much like Sonic does, both characters being able to spin dash, jump into a ball, and sprint. Most of Pikachu's sprites were ripped from Sonic's sprites, although heavily edited (with unused sprites more resembling Sonic's being hidden in the ROM.) while most of the graphics are ripped from other Game Boy titles, including previous Makon games.

There is a total of five levels in the game, all of which are ripped from the Game Boy game Bonk's Revenge with slight changes made to the level design and new layouts made after the original layout "ends" (similar to how Thunder Blast Man's stages are based on the NES version's with similar changes made):

The Game Over screen, featuring a Marill. 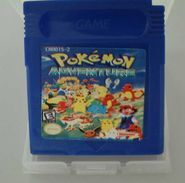 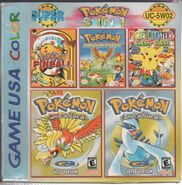 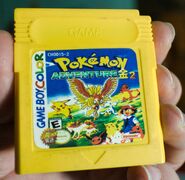 A yellow cartridge with the title "Pokémon Adventure 2" on. 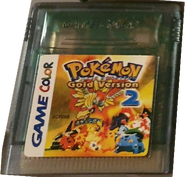 An original copy of Pocket Monsters Gold 2 by Makon Soft