Pokémon Golden is a sprite hack of the NES Tom & Jerry game, released by an unknown company.

Jerry's sprite is replaced by a poorly drawn Eevee, although only the main sprite animation is supported for its jumping, walking, taking damage, and its main attack (throwing marbles). For actions such as the hammer and bubble, Jerry's sprite is visible. Jerry's name also remains on the health bar.

Stage bosses are the same as the original, except for Tom because his sprite is replaced by a poorly drawn Espeon. 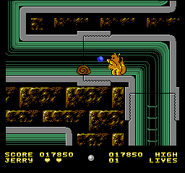 Eevee throwing a ball at the snail on stage 2. 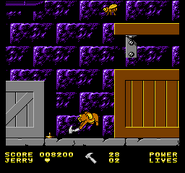 Jerry, instead of Eevee, can be seen while using a hammer attack. 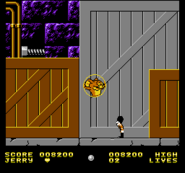 Jerry, instead of Eevee, can be seen while using a bubble.

A cartridge for the game.
Add a photo to this gallery
Retrieved from "https://bootleggames.fandom.com/wiki/Pok%C3%A9mon_Golden?oldid=42890"
Community content is available under CC-BY-SA unless otherwise noted.