Pokémon Ruby (not to be confused with the real licensed Pokémon Ruby for Game Boy Advance) is an unlicensed game made by Makon Soft for the Game Boy Color. It's a hack of Pokémon Mewtwo Strikes Back, which uses a game engine based off of the Mega Drive platformer Pocket Monster.

The game is a standard platformer with 8 levels, five of the eight levels being from Mewtwo Strikes Back while the first three are brand new. At the end of each stage is a boss that must be defeated in order to progress. Pikachu, much like in the aforementioned platformer, can jump on enemies to defeat them or use a screen-wide electric attack that damages everything on screen.

While the better known version is the English version, there's also a Chinese version that was released by Guangzhou Li Cheng Industry & Trade Co that has a debug mode enabled. The debug mode adds a stage select and makes enemies the player comes in contact with to act like the Poké Ball item in the game, though even this seems glitchy as the game won't always count enemy contact as such. Another problem with debug mode is that it makes the game even harder to beat because touching a boss makes it disappear, and the game doesn't count it as defeated if this happens. 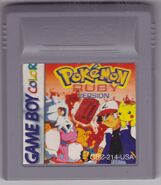 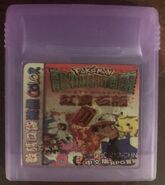