Pokémon Ruby (口袋怪獸 聖變石 in Chinese regions, 寵物小精靈 結晶塔之王 in Taiwanese regions) also known as Pocket Monster Ruby and Pokémon Pikecho, is a bootleg game for the Game Boy Color likely released around 2002, possibly 2003. Its title is taken from the then-recent Game Boy Advance game of the same name. One version of Digimon Pocket was probably released around 2001.

The game puts you in control of Ash Ketchum (Satoshi) (though not explicitly stated as being him) and has you traveling to each town and defeating its leader, much like in the traditional Pokémon games. Interestingly there are no wild battles or experience points, instead you start off with a full team of six of early form monsters and collect rubies to evolve them into a higher form. Also worth noting is that you can evolve mons into almost any mon of the next evolutionary stage, meaning you can evolve a Bulbasaur into a Charmeleon or a Seadra. Some of the final evolutionary forms, along with legendary Pokémon, are early form Pokémon like Murkrow.

This game is also a major hack of a previous V.Fame title, Digimon Pocket. Aside from the new graphics and maps the attack animations and how they work got changed and simplified to match Generation 2 Pokémon Moves (only in Chinese releases; the English release still has Digimon Pocket's attacks.) The Chinese releases also feature slightly revised music from Shi Kong Xing Shou but keep the original's intro theme while the English version keeps Digimon Pocket's music. This might suggest the English version was made and released first then the Asian versions.

Cart of a mainland China release.

Cart of a Taiwanese release. 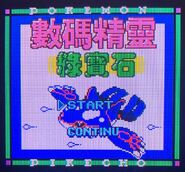