Start a Wiki
Poke Tetris (also known as Pikachu) is a bootleg Tetris clone featuring Pikachu, made for the Famicom by an unknown developer sometime in the early 2000's.

The gameplay is designed to play the same as Tetris, and appears to be a clone of the Tengen version in particular with similarly designed interfaces and 2-player modes (with Jigglypuff - albeit poorly - being the second player). The game features the same music and sound effects as Pocket Monster, with some that weren't used in the original game (excluding its hacks).

A hack of this exists called Falling Blocks, made by Nice Code Software and included on many plug n’ play systems and a handful of multicarts. This version replaces the music with the soundtrack from Kero Kero Keroppi on the Famicom. It was later reworked into a VT03 version called Triple. 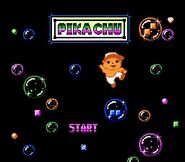 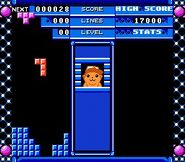 Pikachu's gameplay.
Add a photo to this gallery
Retrieved from "https://bootleggames.fandom.com/wiki/Poke_Tetris?oldid=40671"
Community content is available under CC-BY-SA unless otherwise noted.