Poker Jingling (撲克精靈) is a Poker game developed and released by Idea-Tek in 1990. It was subsequently modified and released in Japan as AV Poker (Poker on the title screen) and the USA as Peek-A-Boo Poker by Hacker International and Panesian, respectively.

In all versions, the player gets to choose the girl he's interested to play with before starting a game. The Idea-Tek version does not name them. The game plays like standard Poker, one receive five cards, gets to give up or bet, give in selected cards for new ones then bet a second time. The game was adapted for other markets with Peek-A-Boo Poker and AV Poker built on top. The rewarding sequences were completly rewamped, more images were added with the later one being much more suggestive compared to the highest rewarding ones in Poker Jingling. The girls were given the following names in Peek-a-Boo Poker and AV Poker respectively: Full House Francine - Ruka, Pok-er Penny - Ayami, Double Dealing Debbie - Mari. 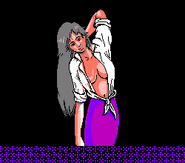 One rewarding image from the Idea-Tek version.