The Power Kracker (or Power Blaster, Power Racer) is a pirated NES-On-A-Chip console that was made to look like the Xbox 360 controller. It is the successor to the Power Player Super Joy III. It is most likely manufactured by Sinango and is essentialy a redesigned Power Player Super Joy III. The Power Kracker has been reported a common famiclone to find at Swap Meets/Flea Markets.

First appearing around 2011, the Power Kracker appears to include two controllers and a light gun (referred to as the Power Gun). Like many consoles with build in games, the Power Kracker claims to have a large number of games (76,000 games, reportable) but really comes with a much smaller range repeated.

The front of the box shows an explosion, the current year of release, and the controllers it includes. The front also claims the console to be "The Greatest Game machine IN the planet!". The back of the box shows 3D graphics and screenshots taken from other games and an uncredited review claiming "The most impressive TV Game Machine made yet". It also shows the button layout for the main console controller. On the back of the box, it has the "Super joystick" logo (The same one found on the back of the box of the Power Player Super Joy III). It also has an invalid age rating on the choking hazard sticker (12+up) when most other products with a choking hazard say 3 and up. The stolen artwork of the ninjas featured on the box are the characters Rikimaru and Ayame from the game Tenchu: Shadow Assassins.

While the console claims, 76,000 games, 73 are known, with a series of repeats. Some of these are repeated with a 3-letter code and may contain spelling mistakes.

The backside of the Power Kracker's instructions

The first version of the Power Kracker/Power Blaster, with the year on the box dating back to 2011. 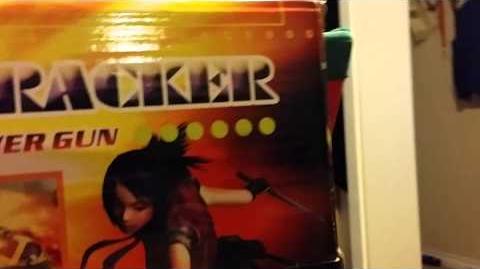