The Power Player Super Joy III (commonly known as the Super Joy) is a line of unauthorized Famiclone consoles that were sold in North America, Brazil, Europe, Asia, and Australia (and therefore, based on the region, came as NTSC, PAL, or SECAM). It is the successor to the Power Joy Classic TV Game.

The system resembles a Nintendo 64 controller and attaches to a TV set. NTSC, PAL and SECAM versions are also available, based on the region it is sold in. Super Joy IIIs were also packaged with a light gun (for NES/Famicom shooters) and a second controller resembling a Mega Drive controller, intended for a second player.

The consoles have 76 built-in games, although marketing frequently claims to have more than 1,000 ways of playing them. Hence, the game count of 76,000 is listed as a gold sticker on the box. Most of the included games had been originally released for the NES or Famicom, but some were created by the manufacturer. Most of the games had their title screen graphics removed to save space on the ROM chip and to reduce risk of liability.

After this product gained some popularity, the Power Player 3.5, an improved model with more games, was released. A wireless version of Power Games was also released, and a version without preloaded games; this model also has ridges in the cartridge slot.

The Super Joy III become one of the most controversial Famiclones after Nintendo discovered it; they took strong legal action against importers and sellers, and obtained a temporary injunction against the import and sale of video game systems with counterfeit Nintendo games.

On December 16, 2004, the FBI executed search warrants at two kiosks at the Mall of America in Minnesota and also searched storage facilities rented by Yonathan Cohen, an owner of Perfect Deal LLC of Miami, Florida.[1] The consoles, purchased wholesale at $7 to $9 each, sold for $30 to $70 each.[2]

In January 2005, after 1,800 units of the Super Joy III were confiscated, Cohen was charged in Minneapolis, Minnesota for selling Super Joy III units at kiosks at the Mall of America and other malls across the nation.[1] In April 2005, Cohen pleaded guilty to selling pirated video games.[2]

As of Spring 2005, NrTrade stopped selling Super Joys, but they still retain stock from other companies. Super Joy IIIs are still in production in China by Sinango but not as widely distributed.

In November 2005, Cohen was sentenced to five years in federal prison and was required to run ads in mall magazines to inform the public of how he sold pirated games at Mall of America kiosks.[4]

By 2006, most shopping malls stopped selling Super Joy IIIs. However, they are still sold by other dealers (e.g. flea markets), or are resold at inflated prices.

The Power Player Super Joy III was distributed via the Teleshopping channel Telemondo during the early 2000s advertised by telemarketer Roberto Artigiani, the console retailed for €69.99 plus a "small" unspecified shipping fee bringing the total cost to at least $76. The channel marketed the console towards a family audience claiming to be a "cheaper" and better alternative to other consoles on the market at the time despite lagging severally behind in terms of technical power and build quality, along with being significantly overpriced. Throughout the infomercial Artigiani attempts to compare the Super Joy III with the then new Playstation 3 and other current generation consoles to make the console look more modern by boasting about the Super Joy III's supposed 76,000 games, cheaper price, ease of use and "outstanding graphics". The infomercial also shows off gameplay of games such as Super Mario Bros, Contra, Yie Ar Kung-Fu, Tag Team Match: M.U.S.C.L.E., Tengen Tetris and Duck Hunt to exemplify just how many games the Super Joy III had to offer, although most gameplay of light-gun games shows just how inaccurate the packaged light-gun was in certain units. It is unknown whether Telemondo faced any legal action from Nintendo for the sale of the Super Joy III although they and Artigiani later went on to market and sell other Famiclones featuring pirated Nintendo games such as the Mega Power.

The Super Joy III comes in a colorful, yet somewhat generic box. The word "game" does not appear on any side, nor is there any text that would indicate what the unit actually does or what its features or capabilities are. The game count ("76000") on the front is in fact a gold sticker applied to the outside of the cardboard box, and it is ambiguous at first what this number actually means. The only information provided (cartridge capability, presence of internal games, etc.) is on a single small sheet of instructions, which are inside the shrink-wrapped inner portion of the packaging which would not be visible to the consumer until after the product is purchased and opened.

There are a number of scenes depicted on the front and back of the box, but all of them are artistic stylized drawings or retouched photos—none of them are actual game screenshots. The box end flap includes three illustrations of the main controller, one each in black, gray, and blue, with checkboxes next to each to indicate the contained color. The system was also available in red, however, which is not depicted on the box end flap even though it is the displayed color on the rear of the box. The rear of the box also shows a green light gun, whereas all of the available systems (red, black, gray, and blue) appear to have been shipped with a silver gun.

The original packaging in the US depicts a number of scenes depicted on the front and back of the boxes, but all of them are artistic stylized drawings or retouched photos—none of them are actual game screenshots. Most famously, an unlicensed still image from Star Wars: Episode I – The Phantom Menace is featured on the front of the box.

The product is marked as having small parts, and being for age 3 and up.

The Super Joy has a number of known design or manufacturing issues:

Built-in games (from various units) include: 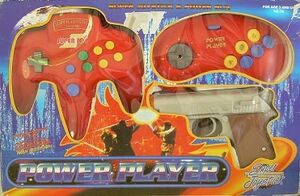 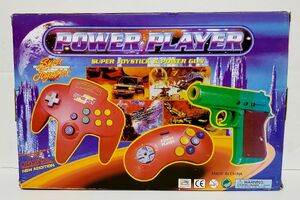 Back of a red Super Joy III box. 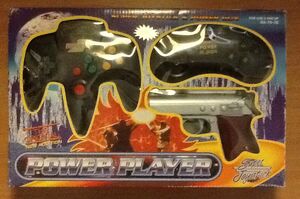 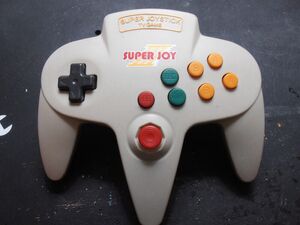 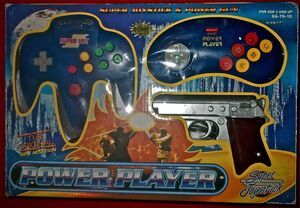 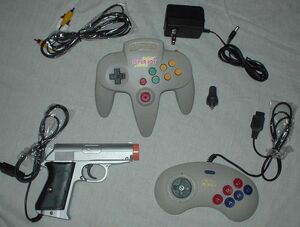 The white Super Joy III and its included peripherals.