Powermon is a Korean PC platformer released at an unknown date by ID Software (not to be confused with the id Software of Wolfenstein, Doom, Rage, Commander Keen and Quake fame). This game is quite notable compared to other bootlegs due to its use of pre-rendered 3D graphics.

The player controls a Pikachu with a raccoon-like tail, and the goal of the game is to reach the house at the end of the stage all while avoiding enemies, which are designed to resemble Pokémon, albeit with slightly altered appearances. 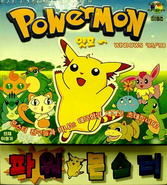 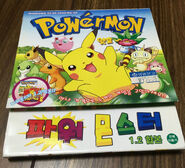 Box art of what appears to be a sequel. 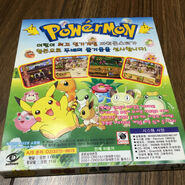 Back of the cover of some version that was featured in a japanese website called Gogotsu.

A collection of three Powermon games, which reveals that it is actually a trilogy.

Title screen of the original game.

Title screen of either a sequel or a special edition.

Gameplay.
Add a photo to this gallery
Retrieved from "https://bootleggames.fandom.com/wiki/Powermon?oldid=40245"
Community content is available under CC-BY-SA unless otherwise noted.