Queen Fighter 2000, Also known as Gals Fighters and Queen of Fighting 2000 (女王格鬥2000) is an unlicensed game produced in 2000 by Vast Fame.  It's an all-female fighting game based off of SNK's Gals Fighters title for the Neo Geo Pocket Color and is V.Fame's first "original" fighter (their previous one, Super Fighters S, is a hack of an official KOF game.)

The game itself uses Takara's fighting engine for their King of Fighters games.  The game has difficulty settings, a sound test, single player team and one-on-one matches and multiplayer.  There are 16 fighters to choose from, although the ending for each is the same.

Most, if not all, of the fighters in this game are based off of the graphics taken from official NGPC fighting games, despite the new designs.  They animate and play mostly the same, but the overhauled looks were a first for the company's fighting games, and easily the most ambitious.  All of the listed characters have their base character and game the graphics are from.

Credits that are listed at the back of the game's manual. 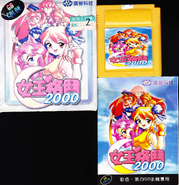 Complete copy of the Taiwanese release. Note the smaller-than-normal size of the box.

Alternate (earlier?) box design. This one was a standard Japanese-style Game Boy box size.
Add a photo to this gallery

Retrieved from "https://bootleggames.fandom.com/wiki/Queen_Fighter_2000?oldid=34299"
Community content is available under CC-BY-SA unless otherwise noted.