Red Pig (Also known as Valiant Pig or Porco Rosso) is an unlicensed hack of TaleSpin on Famicom.

The game starts with a title screen with Porco Rosso along side the captain "Red Pig", The rest contains nothing more than a hack of TaleSpin. Baloo's main sprites and his seaduck are untouched, but his parachute's sprite is replaced with a poorly drawn Porco Rosso. The pause menu replaces Baloo's mugshot with Hamton from Tiny Toon Adventures. Also, the game starts with the baseball level instead of the first level with an option that allows the player to shoot bullets faster and 9 lives instead of 3. 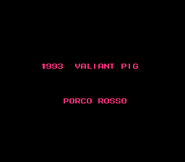 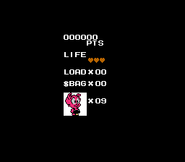 The pause menu featuring Hamton from Tiny Toon Adventures.
Add a photo to this gallery

Valiant Pig's cartridge.
Add a photo to this gallery
Retrieved from "https://bootleggames.fandom.com/wiki/Red_Pig?oldid=48531"
Community content is available under CC-BY-SA unless otherwise noted.