This game is a variation of reversi (Othello), which is played against a girl named Mirika. The player can choose to play against either a younger or older version of Mirika, which act as easy and hard modes, respectively. Each opponent has her own set of voice samples played throughout each round. There is also an option to display handicaps on knowing where to place pieces. Besides that, it's standard Othello, with a particularly difficult CPU. Of note, however, is that the computer will get an "attack chance" once per round and replace one of the player's pieces with its own, presumably to make up for deficiencies in the AI. Also, there is a time limit on placing pieces, and running out of time results in an instant loss. Between winning consecutive matches, you're rewarded with animations of your opponent in various stages of undress.

Back of box (plastic case). 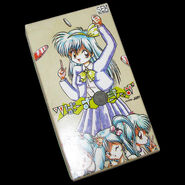 Top-loading cartridge.
Add a photo to this gallery

Retrieved from "https://bootleggames.fandom.com/wiki/Riverse_Kids?oldid=47489"
Community content is available under CC-BY-SA unless otherwise noted.