There are 5 Robot Masters, marked on the level select screen as Frost Man, Clown Man, Tengu Man, Grenade Man and Rock Man. However, on the screen afterwards, the name and sprites don't match, along with some typos (i.e. Grenade Man on the Robot Master select screen is called "Tengv Man" on the following screen with a sprite of Spark Man) As well as this, the actual boss in every level isn't a Robot Master at all, varying between a car, a flying dreidel and a penguin.

The engine contains many glitches throughout. One serious glitch is that sometimes, after killing so many enemies all of the remaining enemies and moving platforms disappear, making the level impossible to complete. Another major glitch is found when battling the boss on Clown Man's stage, where the game will sometimes reset itself without warning. Rockman's health bar is bigger than normal and he can't collect any weapons in this game, nor does he have any extra weapons at the start. As a result, he only has the Mega Buster and the pause screen is blank, aside from showing his health bar. Charging up the Mega Buster is completely useless, as a charged shot does no damage. As there's no weapon energy, all of the items refill Rockman's health. The graphics are taken from the Rockman games and simplified. The music is poorly remade from Rockman 3 and 4. There is no ending, with the game going back to the robot master select screen after beating all of the bosses.

The opening has scenes cut from the real Rockman 8 opening.

Rockman X4 was made by Makon Soft in 2000 and is pretty much exactly like Rockman 8 with an attempt at colorization, but it has different intro pictures (This time showing scenes from Rockman X4) and a different stage select screen. Also, it doesn't show you a Rockman World 3 boss when you select a boss. Instead, it shows the boss' mugshot.

A complete copy of Rockman 8. 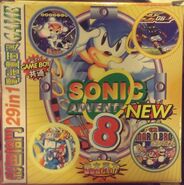 A multicart featuring the Rockman X4 version of the game.

Cartridge
Add a photo to this gallery

Retrieved from "https://bootleggames.fandom.com/wiki/Rockman_8_(GB)?oldid=40778"
Community content is available under CC-BY-SA unless otherwise noted.