Rocman X's title screen is mostly copied from the first Famicom game of Rocman's, with the logo taken from Rocman X. The game also includes a story in English where Gadem City celebrates its centennial before the mayor's daughter, Miss Lucy, is kidnapped by the Paulung-Tang gang, who then take over and sabotage the city, holding it for a $20 billion ransom. Thunder Blast Man himself (also commonly known as Rocman X) appears to be based on Rocman/Mega Man and bears a passing resemblance to Quickman from Mega Man 2, as well as sporting a cape.  His default weapon is a boomerang as opposed to a standard Mega Buster, and only one can be thrown on screen at a time. You can get different weapons as well as buy a spare continue (if you don't have one) by visiting stores located before boss fights in each world, save for the motorcycle stage. As well as this, Thunder Blast Man has a charge move triggered by holding B and, after it fully charges (designated by the health bar flashing) releasing it while holding up, left, or right to fly in that direction (releasing it while being still cancels the move.)  This allows him to get across many pits throughout the game.

The first three areas are available on the stage select screen, and most stages (save for the fourth area, where the boss is fought at the end of a single motorbike area) are split into two parts and a boss each.  After clearing these, the game becomes linear as you access the last three areas automatically in order.  The fourth area is a motorbike chase scene which looks and plays somewhat similarly to the speedboat sequence towards the end of Wave Man's stage in Mega Man 5. If you die in a stage you can continue from the point that you left off at (assuming you have a continue; you always start a new game with a continue) but if you used it up or don't have one you have to restart at the stage you're currently on, losing your bought weapons in the process.  This is a bit different in the mine cart segment of the final world, as falling into the spikes give you a game over regardless of health or continues, but you restart the level with your on-hand items (spare continue and/or weapons) intact.  The ending explains that Thunder Blast Man has saved Gadem City from the Paulung-Tang gang and that the city has made a statue of him.

The GBC version has similar graphics and levels, but has completely different music. Most of the graphics are taken from the Famicom/NES version, including some unused enemy graphics.  Also, the gameplay is changed to a more traditional Megaman-styled game and there are no shops or additional weapons in the game.  The level architecture in most of the levels is partially based on the level design from the NES game (usually at the beginning of a stage) although with accommodations made for your character's lack of a fly ability.  The bosses require proper timing with hits like the NES version, except they're vulnerable for a much shorter time. Clearing all the stages yields no ending, as the game doesn't record bosses being defeated like a traditional Mega Man game. Two versions of this game exist: A "Rocman X" version featuring slightly edited Mega Man sprites and very slightly lower aim, and the more well-known "Thunder Blast Man" version, featuring the protagonist of the NES game. This version shares numerous similarities with Yong Yong games, particularly Rocman 8 and X4.

On some emulators, the credits show the third screen at the beginning instead of the first.  They display properly on real hardware.

Back of Rocman X's box

Scan of Rocman X's Famicom Box. (Back)
Add a photo to this gallery 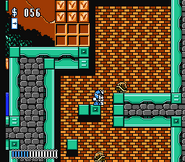 A In Game Screenshot. 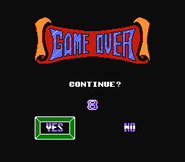 The Game Over Screen. 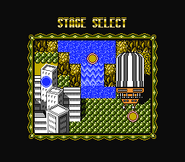 The Stage Select.
Add a photo to this gallery 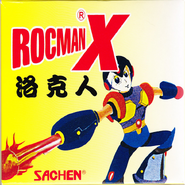 Box front of another copy of Rocman X Gold that came with English instructions. Probably a Hong Kong release. 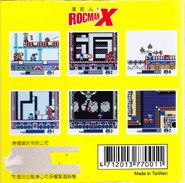 Back scan of the aforementioned Hong Kong(?) release's box.

Scan of the Hong Kong(?) version's manual. This was also included with NES copies of Thunder Blaster Man (and some had the top "ROCMAN" changed to "THUNDER BLAST MAN".) 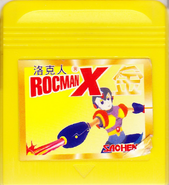 Rocman X Gold cartridge. This also came in the usual Sachen color molds and a metallic gold-painted cart variant exclusive to this game.
Add a photo to this gallery 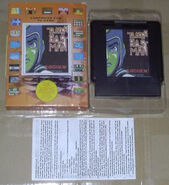 A boxed copy of Thunder Blast Man for NES that uses the GBC title screen for the label.
Add a photo to this gallery

Boxed copy of the Thunder Blast Man version of the GBC port.
Add a photo to this gallery

A 31-in-1 Sachen multi featuring the Rocman X Gold version and cover art that was not used anywhere else. 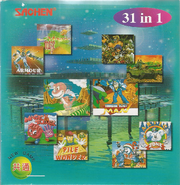 A scan of the 31-in-1 Game Boy multicart featuring Rocman X Gold. 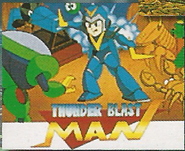 A close-up of the 31-in-1's "Thunder Blast Man" art.
Add a photo to this gallery

Retrieved from "https://bootleggames.fandom.com/wiki/Rocman_X?oldid=26385"
Community content is available under CC-BY-SA unless otherwise noted.