Ronaldinho's Soccer 64 1998 is a hack of International Superstar Soccer 64 developed by Twin Eagles Group and released in January 1998. The game is one of the few unlicenced/bootleg games to have been released for the Nintendo 64 due to the console's copyright protection, although the game lacks a real CIC which requires the use of an N64 Passport peripheral to boot the game properly.

This version of the game replaces the generic teams and players with real-life counterparts, along with adding the Brazilian team Grêmio Foot-Ball Porto Alegrense to the game, albeit somewhat sloppily. The gameplay is identical to the original game, though the in-game text has been translated to Portuguese along with the commentator voice clips being redone and some music tracks being changed. This version also removes almost all mentions of Konami and Nintendo, crediting the developer as "Lai Pen Computer Group" (on adboards and Controller Pak menu, Konami still is mentioned). 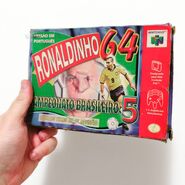 Back of cartridge variation 2. This one is recycled from a Japanese cartridge but the tabs are burned out to fit in all cartridge regions.

Game being played through an N64 Passport.