Sanguo Chunqiu: Sichuan Sheng (三國春秋 四川省) also known as Sichuan Mahjong II (四川麻將II) or Shisen Mahjong II (from the Japanese romanisation of the latter title), is a Famicom game based on the mahjong solitaire game Shisensho, developed by Hummer Team and released in 1996 by NT. A fan translation patch was released in 2018 to make the game playable by English speakers.

You can choose to play alone, against another player or in story mode. In 1 player mode, the goal is to clear the whole board while in other modes, you must make as much point as possible to go to the next stage. 2 pieces must be joined with less than 3 turns to remove them from the board. 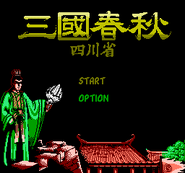 Alternate title screen.
Add a photo to this gallery
Retrieved from "https://bootleggames.fandom.com/wiki/Sanguo_Chunqiu:_Sichuan_Sheng?oldid=39541"
Community content is available under CC-BY-SA unless otherwise noted.