The term "Secret Gambling Games" (also known as "Stealth Gambling Games" by MAME developers) refer to arcade games with hidden gambling functions. These games are usually unlicensed versions of other arcade games, including Pac-Man, Space Invaders, and Tetris, often with a drastic downgrade in gameplay, graphics and music. A switch is present in the games that switches the game to a gambling machine. Secret gambling games were often used in areas where gambling was deemed illegal, the arcade portion added to avoid action from law enforcement.

Several versions of Cherry Master feature a port of Ms. Pac-Man, branded as Super Pacman (no relation to Namco's official Pac-Man sequel of the same name) with the maze turned 90 degrees to fit the horizontal monitor. One could argue this hardware was not designed to run action-heavy games like Ms. Pac-Man; the game runs incredibly choppy. Another version features Tetris instead. Using a secret input, the games will boot into Cherry Master (version 8.01 for the Tetris, and 8.31 for the Super Pacman version). The original Cherry Master games were made by Dyna based in Osaka, Japan, but these bootlegs were made by another company named Corsica and run on different hardware. 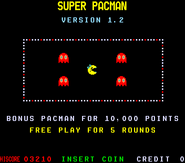 Also known to exist are Space Invaders and Pac-Man clones - the gambling mode reuses sprites from both games specifically. The company that made the games and their release years are unknown, although the games run on the same hardware as 4 En Raya - a Connect Four-type game made by the Spanish company IDSA. The Space Invaders game is extremely difficult, as the aliens' fire is almost too fast to dodge.