Start a Wiki
Sheng Huo Lie Zhuan (圣火列传) is a Chinese RPG made in 1991 by Computer & Entertainment for the Famicom / NES. It is known as the first Role-Playing game made by a Chinese developer and one of the two RPG made by C&E for the console.

The credits are shown during the intro sequence in Chinese. The roles are written to look like actual movie credits, hence the unclear positions of the development team[1].

Original release with box and inserts. (Photo by tonychen631220) 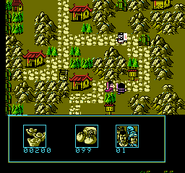 Retrieved from "https://bootleggames.fandom.com/wiki/Sheng_Huo_Lie_Zhuan?oldid=38723"
Community content is available under CC-BY-SA unless otherwise noted.