Shi Kong Xing Shou (時空星獸, translated as Space-Time Star Beast and also known as 星空神獸, or Mythical Beasts of the Starry Sky) is a Pokémon-esque role-playing game developed by Vast Fame and was released on July 18, 2001.

The game involves the main player collecting Engine Crystal pieces (動力晶片) to power an ancient spaceship once used to divert a similar event in the past. The game itself is a mix between Pokémon and Digimon; you encounter Star Beasts during your travels which you can either fight or capture using Pokéball-style items called Capture Orbs. Boss monsters can't be captured, and there's no nicknaming feature in the game. You can have up to six beasts with you at all times, and the other beasts you've captured are stored in PCs. Unlike Pokémon, there is no multiplayer support such as trading or battling. There is also a Pokédex-type device, except there's no search function and it only provides basic trivia on the beasts; there's no stats, battle cry, or nest-searching function.

Star Beasts have stats similar to Pokémon; Hit Points, Attack (攻擊), Defense (防禦), Special Attack (法力), Special Defense (魔防), and Speed (速度). Strangely, you can only view their Special Attack stat when they level up. There are 8 types of the Beasts: Fight (鬥), Light (光), Shadow (闇), Fire (火), Water (水), Wood (草/木), Earth( 土), and Air (飛/風). One thing different about the game from Pokémon is that if your team faints, you're not sent to a Healing Center. Instead, the battle ends and your monsters are brought up to 1 HP. This happens even if just one of your beasts faint. Another thing to note is that this game lacks balance. For example, One-Hit KO moves have high accuracy, Some of high-damage inflicting moves (like Close Combat (無雙)) have too much PP for it, Shop and Beast Center are available at most places, and Star Beasts can be inflicted with multiple status ailments, such as paralysis, poison, and sleep, all at once. One monster, Fungus Fairy, is a prime example of this disbalance.

One aspect that the game shares to Digimon is that each of the main heroes have their own Partner Beast. Partner Beasts can only be used by that specific character (meaning only Ballot can use Bladeberus, Buck can only use Beattro, etc.) If the player changes characters, the previous person's Partner Beast is replaced with the new character's beast. So if the player switches from Ballot to Lante, then Bladeberus will be replaced with Muserode in the player's roster. Each Partner Beast has its own stats, and these stats and levels aren't carried over to the next player's Partner Beast, so each one needs to be raised individually. Partner Beasts can't be deposited, and each has a special function in the overworld, such as hopping over pits, allowing the player to move along water, or cut down obstacles blocking a path.

Items are separated into three categories: Consumables, Equipments, and Key Items. Balls (膠囊) and Technical Machines (秘技) are categorized in Consumables. Equipments can be held by beasts, and can be used repeatedly. They can: Recover HP during battle, Prevent status effects, Boost attack, or Reduce damage. There are 50 TMs in the game, but some of them are missing.

The sprites for many of the Star Beasts are edits of character sprites from Pokémon Gold and Silver, Keitai Denjuu Telefang: Power and Speed, Shin Megami Tensei: Devil Children, and the Mega Man Series. None of the pirated sprites are pixel-for-pixel perfect; they tend to be either larger or smaller than the originals. This suggests that the artists most likely redrew the sprites by hand, as opposed to ripping them straight from the original games' ROM files.

¹ The Chinese characters in this particular character's name (Lei De) translate to "Randt" but the name used in the fan-translated walkthrough is "Newton." 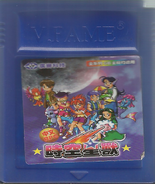 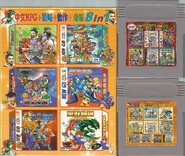 Box of the original vast fame release.
Add a photo to this gallery

Retrieved from "https://bootleggames.fandom.com/wiki/Shi_Kong_Xing_Shou?oldid=48154"
Community content is available under CC-BY-SA unless otherwise noted.