BootlegGames Wiki
Register
Don't have an account?
Sign In
Advertisement
in: Games, Famicom/NES games, Shoot 'em up games,
and 3 more

The game's a very simple vertical shooter where the player controls the titular combat helicopter.  The game is three levels long, with every level being set up the same way: a wave of fighter jets that don't touch the bottom of the screen, a wave that does, two patrol copters, a wave of weaker copters that slightly curve towards the player, a fast wave of divebombers, then finally a boss.  Aside from enemy/level graphics, the only difference between each level are the bosses.

The player starts off slow and with a basic gun, but defeating enemies will yield power-ups that include various weapons and health power-ups.  If the player collects the same gun continuously the firing speed will increase then afterwards the player's speed.  Collecting another power-up will put their weapon at the first strength level of the new weapon (though speed-ups will stay around.)  The player can still fight even if their fuel reaches zero, however if an attack that will bring the total to less than 0 connects the Sidewinder will explode and it's game over.

After clearing all three stages, the game loops and continues to do so until the player gets a game over.  There's no ending or credits whatsoever. 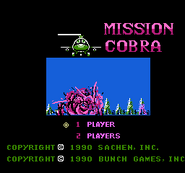 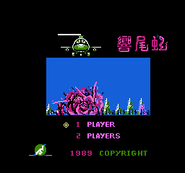 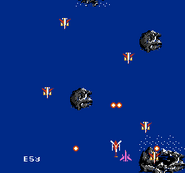 Another gameplay shot of stage 1.