Sintax Technology Co., Ltd (新特奇科技有限公司) is a company that produced games mostly for the Game Boy Color and some for the Game Boy Advance. It was founded in Taichung, Taiwan, and originally developed educational PC software, and established operations in China at some point in the early 2000s.

Some of its earliest games are credited to BBD on the title screen, but Sintax appears to have moved to internal development later on. BBD credits are often removed in the non-Chinese releases.

Sintax is known to have released Game Boy Color games[1]. Some of them are in English, German, and Thai (and possibly Spanish too), most of which are still undumped. All of these games use music stolen from elsewhere, and many are simply graphics hacks of other Sintax titles.

Sintax also released a number of Game Boy Advance games[2]. Around 23 have been discovered so far - most of which use variations on the same glitchy platform engine, originally from a port of Digimon Adventure from the SNES. Their newer games such as Super Contra 7: Isoleted Force Sortie and Star War 4: Warrior Revenge use a new platform engine, while Mario Cart and Disney Cart use a racing game engine with characters from said franchises in jet aircrafts. The music in these games originated from Vast Fame. 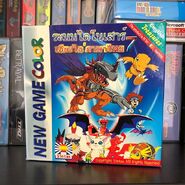