The game is essentially a clone of Don't Pull by Capcom (originally part of the Three Wonders arcade compilation, also released as a stand-alone mobile game) which was itself a clone/update of Sega's Pengo, although the graphics and characters appear to be original. As in those two games, the player must defeat all the enemies in a single-screen level by pushing blocks to squash them.

The sound engine is taken from Wonderboy III: Monster Lair, and the stage intro/clear music is reused from that game; some of the other tracks are based on those from Don't Pull, while one is from Gamtec's NES game The Universe Soldiers. The musician credited for this game is Hanmin Liao, who often worked for Gamtec, but most of the other staff appear to be from Chuanpu. 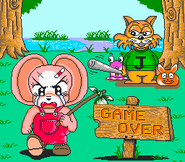