BootlegGames Wiki
Register
Don't have an account?
Sign In
in: Articles in need of cleanup, Games, Game Boy games,
and 6 more

This article is about the Game Boy game, Sonic 3D Blast 5. For the Somari hack of the same name, see Somari.

Sonic 3D Blast 5 for the Game Boy is a platformer developed by Makon Soft. The game was released sometime after 1997 since this game features remixes of music from the PC game, Sonic & Knuckles Collection.

The gameplay is very similar to Makon Soft's other platformers, using an almost identical engine to those games. This game is infamous due to its poor quality.

Sonic's controls work similarly as they do in Sonic The Hedgehog 2. However, to defeat enemies you can only jump on them instead of spinning into them. In turn, this makes the Spin Dash in the game rather useless. There are numerous enemies ripped from the first Sonic The Hedgehog and Sonic The Hedgehog 3 although they're reduced to moving back and forth in this game.

The game has a total of 5 levels that appear to be based on both levels of the Mega Drive Sonic The Hedgehog games. There’s a map before each level, explosion is from Sonic 3D Blast, which is useless and irrelevant to the game.

The first level is similar in appearance to that of most Sonic games; a tropical setting that seems to be based on Green Hill Zone. The second level is based on Flying Battery Zone from Sonic & Knuckles and includes the robotic mice from that zone. The third level looks some-what similar to Spring Yard Zone, although as the other levels are based on Sonic 3 & Knuckles it's probably based on Carnival Night Zone. The fourth level takes place in a desert and is likely based on Sandopolis Act 1. It's often considered to be the most difficult level in the game due to glitches which frequently occur as well as a gap that is almost impossible to cross (to cross it, bounce off a Buzz Bomber). The fifth level is based on Marble Garden Zone from Sonic The Hedgehog 3. 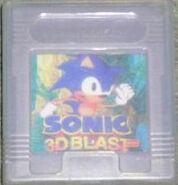 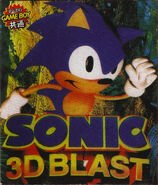 Front of the box of the alternative cart. 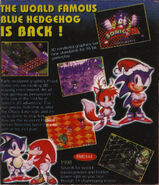 Back of the alternative cart. 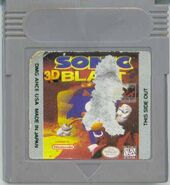 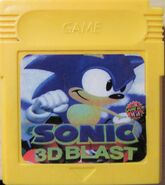 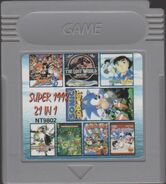 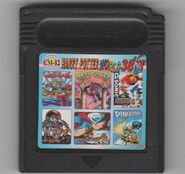 Multicart with Sonic 3D Blast that uses the art for G Sonic (Which is Sonic Blast on Game Gear in Japan).

A multicart with Sonic 3D Blast 5, Sonic Adventure 7, and Sonic 6.

A 30-in-1 multicart with the game (using Sonic Blast box art).

Sonic Adventure 7 is a hack of Sonic 3D Blast 5, made in 1999, although this hack is for the Game Boy Color. The game adds color, alters some of the graphics and changes the order of the levels, with the fourth level from S3DB5 becoming the first level. What used to be a remake of the intro from Sonic 3D Blast was replaced with Sonic & Knuckles' intro, and the title screen is very poor digitization of Sonic Adventure's box art. Strangely, the game includes a manual which is mostly a poorly done edit of Sonic Blast's manual, with most references to Knuckles being replaced with the Sonic Adventure 7 logo, despite Knuckles himself appearing in the intro (in green.) This game was later hacked to make Pokémon Jade and Pokémon Adventure. 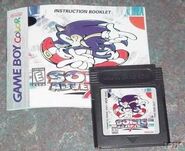 The cartridge of Sonic Adventure 7, complete with instructions.

Sonic Adventure 8 was released by Makon Soft Studio in 2000. The intro itself has been completely redone and the game now has the intro music from S3DB5, and the second (S3DB5) / fourth (SA7) level has become the first level. As of September 12th, 2017, Sonic Adventure 8 is finally dumped and playable in most emulators.

A boxed copy of Sonic Adventure 8. (Note the use of a rumble cartridge)

Back cover. (showing characters that do not appear in the game) 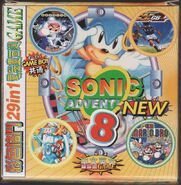 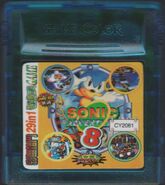 The Cartridge to the 29 in 1 Sonic Adventure 8 and Rockman X4.

The title screen. The game calls itself Sonic 8 but the name on the box says Sonic Adventure 8.

The end of the level/Goalpost.

The Game Over Screen. (Same in all Versions S3DB5/SA7)

Pokémon Jade is a hack of Sonic Adventure 7 made by the same company in 2001. In this version, the colors are a bit more detailed than Sonic Adventure 7, the music is rearranged, and you control a Pikachu (the same one as in the later-released Pokémon Adventure). The game crashes when you complete the first level due to a programming error, making it impossible to complete the game. 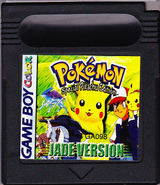 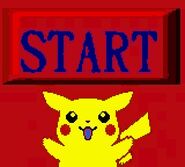 The start screen with a discolored Pikachu. 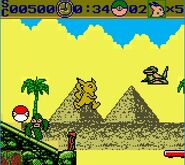 Stage 1 with the same level as in 'Sonic Adventure 7' but with colors at last.

Pokémon Adventure (not to be confused with the official manga of the same name) is quite similar to Jade, but was released in 2000 (the same year the official game Pokémon Crystal was released). Moreover, the storyboard at the beginning is different and the graphics for the levels and the enemies are completely new (although some are taken from other games that Makon Soft has ported). 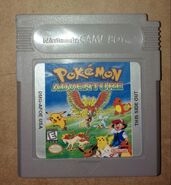 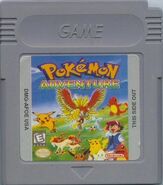 The typical version of the cartridge. 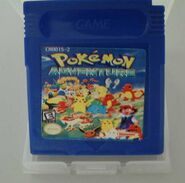 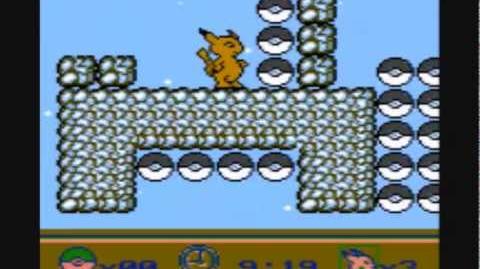