Sonic 3: Fighter Sonic is a pirated game for the Game Boy Advance. It uses music from Vast Fame, though it's believed to have been developed and published by Sintax since it shares an engine with several of their other GBA games such as Digimon Adventure and Crash Advance IV.

As stated, this game uses the same engine as a string of other GBA platformers developed by Sintax. You can jump and move left and right. In this game, your projectile attack is throwing "spin dashes" at the opponent. The game's engine suffers from several bugs.

Most, if not all of Sonic 3 Fighter Sonic's sprites are ripped from the Sonic Advance series. Notably, Sonic's life icon is his Sonic Advance 2 life icon, but with sunglasses. The graphics for Sonic and all of the objects seem to be taken from Sonic Advance and Sonic Advance 2 but with fewer animation frames. Oddly, the sound when collecting rings was stolen from Pokémon Red and Blue. The game has a total of 4 levels; there are rings throughout said levels, but they seem to have no purpose other than increasing the score. Rather bizarrely, Sonic doesn't lose rings when hit and instead has a health meter. The game includes a score counter which can be increased in various ways. 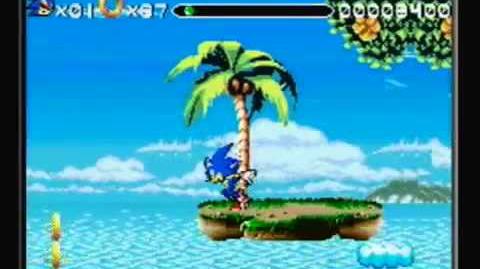 Retrieved from "https://bootleggames.fandom.com/wiki/Sonic_3_Fighter_Sonic?oldid=43871"
Community content is available under CC-BY-SA unless otherwise noted.