BootlegGames Wiki
Register
Don't have an account?
Sign In
Advertisement
in: Games, Games based on cartoons, Game Boy games,
and 6 more

Sonic 6 (Not to be confused with Sonic The Hedgehog (2006) which is an official game made by SEGA) is a pirate hack for the Game Boy released in 1998 credited to "Sonic World". It is a minor graphical hack of the 1993 Speedy Gonzales Game Boy game by Sunsoft.

This hack replaces all of the sprites and references to Speedy Gonzales with Sonic. The game was likely chosen to hack due to Speedy Gonzales similar gameplay mechanics to that of the Sonic series such as loops, side springs that make you accelerate, etc. Unlike the original game, which starts in "Ice Zone," Sonic 6 starts in "Forest Zone" (like another hack of Speedy Gonzales for SNES to Sonic The Hedgehog).

Below is a list of zones and passwords for Sonic 6. They are different from the original game's passwords because of the different level arrangement. 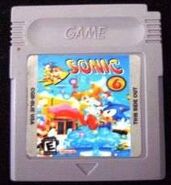 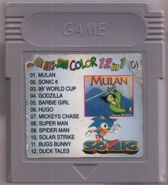 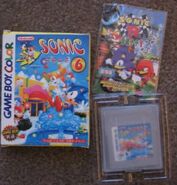 Another Sonic 6 Cartridge which appears to be packed in with a Japanese Sonic R manual. 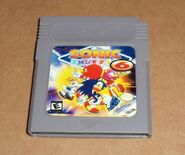 Another cart featuring cover art from Sonic Shuffle for the Dreamcast.

Images shown on the right are from the original Speedy Gonzales, the left from Sonic 6.

Difference between endings which is just one picture for Sonic 6 and motion credits for Speedy Gonzales.

Frame 1 difference but Speedy Gonzales is animated and Sonic 6 is not.