Star Ally is a space shooter game developed by JungleTac, and is included on numerous plug and plays. This game is very similar to the Famicom title Recca.

The player plays as a spaceship, who flies through outer space. The objective is to get through 4 different stages and fire at numerous enemies. There are a few different power ups to improve the spaceship's ammo firing power, or even change the directions that the ammo fires in. The player must press 'A' to fire ammo, and a lot more can be fired if the turbo A button is held, which makes the game easier.

Star Ally has both a single player and a two-player mode.

There are two versions of Star Ally: the earlier version (included on devices such as VG Pocket Tablet and VG Pocket Max) allows the player to exit to the game selection menu screen from the main menu; the game also forcefully redirects the player to the game selection screen after he or she enters their high score (either from completing the game or from a game over). In the later version (included on systems like the Lexibook Retro TV Game Console), the Exit option is still available on the title screen but cannot be selected. The player can only exit the game from a soft or hard reset.

As a result, a bug was introduced in the later revision: the player can re-enter the same score from the top score options on the main menu as many times (but still change the three-letter initials). By default, there are six high scores from "ZXH", the top default score of which is 11,300 points (which can be beaten very easily). 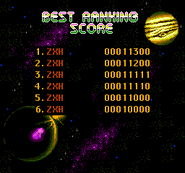