Street Fighter II: Champion Edition is a hacked version of the original SNES port of Street Fighter II: The World Warrior, developed by Twin Eagles Group and published by an unknown company. It was distributed in South America and was available before the official SNES port of Turbo: Hyper Fighting. Although the game is referred to as "Champion Edition" on the packaging, it is never actually referred to as such on the title screen, nor does it feature any of the gameplay tweaks or move changes featured in said official release.

Unlike the official SNES port of the original SFII, this version adds the ability to play as the final four boss characters (Balrog/Boxer, Vega/Claw, Sagat and M. Bison/Dictator), which was a feature previously unavailable, despite rumors floating around at the time. Prior to this game's release, the only way to access these characters was through a Game Genie code published in the American video game magazine Electronic Gaming Monthly, which was extremely buggy and only worked in two player versus mode.

These characters' normal moves are not the same as in the Champion Edition official arcade, and often use the same animation for different attacks.

After defeating the final boss, the game will show a glitching victory screen and freeze, requiring a system reset.

If the Capcom code that allows players to select the same character is input, it will also activate a cheat that allows the use of special moves in mid-air.

Two follow up hacks were distributed in South America, based on Twin Eagle Group's SFII:CE. They feature a variety of changes, most of which can be accomplished by using a cheat device on a normal Street Fighter II cartridge. TEG never listed these as being a part of their work, and due to the additional credits at the title screen, it appears an unrelated South American group was responsible for both. 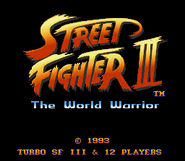 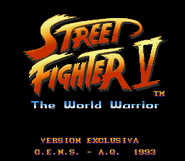