As a port, Street Fighter Zero 4 cuts out the majority of mechanics from Street Fighter Zero 3 such as the Super Combo gauges, the -ism styles and the Guard Power gauge, making it much more similar to Street Fighter II in its gameplay. A is used for punches while B is used for kicks. You can also throw the opponent while holding forwards or backwards and pressing A. Each character has about either two or three special moves, most of them being the same commands. Basic attacks appear to do chip damage to the opponent which is unusual for a Street Fighter game. There also seems to be a brief invincibility period after you finish getting up from a knockdown where you can't be hit. If you get hit in the air, you never recover mid-air and instead, lie down once you land.

Only thirteen characters out of the original twenty-eight are in this port and four of them are clones, making the roster only consist of nine unique characters. The returnees from Street Fighter II (with the exception of Ken) retain their move sets (Vega (M.Bison) gets a Hadouken instead of his Psycho Crusher) and their sprites seem to be based on the Game Boy port of Street Fighter II. The remaining cast use completely different movesets however and much of their sprites and animations don't match, some having the wrong icons and some others seem to be completely mixed up; Cody is a clone of Guy, Gouki's (Akuma) sprites are based on Cody's and Ken's sprites are edits of Ryu's but with Gouki's hair. Some of the characters seem to be derived from King of Fighters characters: Gouki has animations based on Terry Bogard and Guy has some animations based on Geese Howard. The palettes for most of the fighters don't match, resulting in characters such as Gouki being a red and yellow Cody and Vega being entirely blue. On the select screen, there are what appear to be question mark icons but you can't access these and there's no way to unlock them.

Once you choose your character, you fight through the rest of the roster out of the best two out of three rounds. There is no ending to the game; once you beat it, you get your usual victory screen and the game resets.

The stages are all from Street Fighter Zero 3 but resized down. None of the music is from Street Fighter Zero 3 however, mainly consisting of tracks from Sachen or Sachen-related games. The title screen track is from the Game Boy Color version of Jurassic Boy 2. For every fight, the game goes back and forth between two tracks: one from the first level of The Dragon and another is the boss theme from Contra Spirits, being based on the arrangement from Ei-How Yang's NES port of Contra Spirits.

Ryu / Ken - Ken is merely a headswap of Ryu but appears to use Gouki's hair.

Gouki (Akuma) - Gouki appears to be Cody while fighting. Gouki seems to be partially based on Terry Bogard from the Fatal Fury/King of Fighters series; having his stance, Power Wave and his win pose.

Gen - Gen uses Guy's icon on the select screen and R. Mika's icon in the HUD. 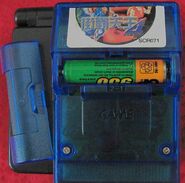 Front of the box that was intended for Western territories. (Source: Keaton)

Back of the box that was intended for Western territories. (Source: Keaton) 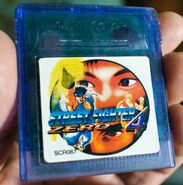 A blue variant of the cartridge in the shape of a GameBoy Color game.
Community content is available under CC-BY-SA unless otherwise noted.
Advertisement