Super Bros. 11, also known as Mario Adventure, is a Mario hack of Adventure Island 3 released on the Famicom. It has a near-identical PCB to Super Mario 14's.

Just like Super Bros. 9, Super Bros. 11 replaces Master Higgins' sprites with Mario. The game was made significantly easier, as Mario starts off with 30 uses of every items instead of 0, and with 9 lives instead of 3. 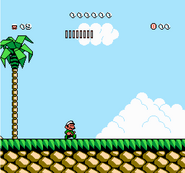 Gameplay.
Add a photo to this gallery
Retrieved from "https://bootleggames.fandom.com/wiki/Super_Bros._11?oldid=32152"
Community content is available under CC-BY-SA unless otherwise noted.