Super Bros. 16 is a hack of Kaiketsu Yanchamaru 2: Karakuri Land, the first Japan-exclusive sequel to Kid Niki: Radical Ninja. This game was released on the Famicom.

Like with Super Mario 14, Super Bros. 16 is a hack of a Kid Niki title, and Kid Niki's sprite was replaced with a custom-drawn Mario. The title screen was updated with the bootleg game's logo and has the sprite of Mario at Toad's House in Super Mario Bros. 3, except recolored pink. Mario is also light pink during gameplay, similar to many other Mario bootleg titles.

Super Bros. 16 was made easier, as the player stars off with 10 lives instead of 3, and 5 energy points instead of 0. 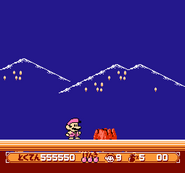 Gameplay.
Add a photo to this gallery
Retrieved from "https://bootleggames.fandom.com/wiki/Super_Bros._16?oldid=37741"
Community content is available under CC-BY-SA unless otherwise noted.