This article is about Super Bros. 9. For games with a similar title, see Super Bros. (disambiguation).

Master Higgins' sprites are replaced with Mario's (based on his Super Mario Bros. 3 sprite). Mario starts with 10 lives instead of 3. The player can select between worlds from the button combination: Right + Left + Right + Left + A + B + A + B.

Super Mario World 9 is a re-release and variant of Super Bros. 9. Its title screen was changed and gives a copyright date of 1996. 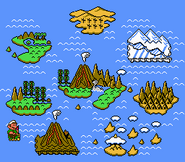