Super Contra 6 is a pirated hack of Contra Force for the NES, released in 1994. On multicart menus and just about all cartridge labels, it is simply named Contra 6.

Super Contra 6 is little more than a mild graphics hack of Contra Force. Currently, its release information is not known. However, it seems to bear striking similarities to some other hacks.

The 4 playable characters were replaced with characters from other games/movies. Burns is now Rambo, Smith is Guile, Iron is Ryu and Beans is Bill. Rambo and Bill's portraits are taken from Contra (Japanese version), Guile's portrait taken from Ikari Warriors 3 and Ryu's is from Double Dragon. All of characters now start with 9 lives instead of the 3 the original game had.

This hack also seems to have fixed a lot of the slowdowns that the original game is most infamous and criticized for. However, the intro sequence and the ending are now somewhat corrupted. 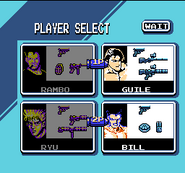 Player Select
Add a photo to this gallery

Retrieved from "https://bootleggames.fandom.com/wiki/Super_Contra_6?oldid=38539"
Community content is available under CC-BY-SA unless otherwise noted.