Super Donkey Kong - Xiang Jiao Chuan (香蕉船) is a Donkey Kong Country bootleg for the Famicom. The developer is believed to be Chengdu Tai Jing Da Dong Computer Co with Liang Yi Productions as the publisher (their Chinese name is displayed in the intro: "兩亦製作").

While this game takes many elements from Donkey Kong Country, it's more of an original game than a port. The player can only choose to be either Donkey or Diddy Kong and you play through the whole game with only one. They lose a life after three hits as opposed to one as shown in the top left. (Which is not displayed anywhere on the HUD.) A jumps and the B button lets the character perform their attack (unlike the original, doing it while standing doesn't cause you to move), run, and pick up and throw barrels. The game is notorious for its controls: the jumping is considered to be awkward because jumping causes the Kong to move at a running pace and the player can only turn around when at the peak of the jump while jumping forwards, which makes it difficult to do precision jumps. Another issue is holding B doesn't automatically make you run; you need to complete your attack before you begin running. It's also been noted that the Kongs themselves feel rather slippery when attempting to stop, especially when running.

There are eight worlds with two levels each: Forest, Mushroom, Pool, Grass, Cave, Lake, Jungle, and Dock. Both Pool and Lake contain water levels where the player must swim through them. When you begin, you are presented with a map and when you beat a world, you can travel to the next one or ones you previously beaten. The first Cave level also contains a mine cart section like Donkey Kong Country. After every two levels, there's a boss that needs to be fought; three of them from the original Donkey Kong Country (Queen B. shows up as the second boss with Very Gnawty and King K. Rool afterwards) and one of them is completely new: a mouse standing on hind legs that throws spiky enemies at you. All the bosses take about four hits before becoming defeated. However, during boss battles, you can only take one hit.

The level design is often regarded as being bad; often times you're required to make precise jumps with the notorious controls. There often appears to be times where it's not clear where to go, either you're supposed to drop below (and combined with the fact this game does have bottomless pits, this often requires the player to make leap of faiths) or there's a moving platform that has not showed up for the player. While every other level requires you to get to the end in order to beat it, the first Forest level is notably odd in terms of layout. Near the end of the level, there's a moving platform with Zingers; this actually leads to a bonus level with a dead end. Instead, you need to drop down and touch a bomb to slide it over and explode on the wall, creating the exit for the level. The first Dock level also doesn't end by reaching the end of the screen but instead, you have to ride on a falling platform and jump to the left onto another platform and exit.

Some items still remain from Donkey Kong Country such as the bananas, the 1-up balloon (although drawn as a generic balloon) and barrels. Like in Donkey Kong Country, collecting 100 bananas gives the player an extra life, with the lives themselves being represented by brown hearts on the top left corner of the screen.

Like other Donkey Kong Country-based bootlegs, passwords are given as opposed to a save feature; these are awarded after completing a world. The player is given two continues and when you're allowed to use one, you either have the option of walking to the left to continue or to the right to go back to the title screen.

The graphics are vaguely based off those of Donkey Kong Country, with most of the enemies and levels looking somewhat like their counterparts from that game. Despite King K. Rool showing up at the end, there doesn't appear to be any Kremlings but a walking mammal-looking creature shows up instead. The music is seemingly original, and so are the sound effects, however, most of the music is off-key and is widely considered to be annoying. 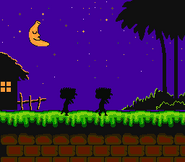 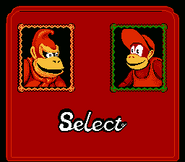 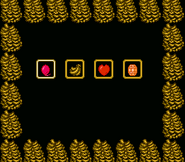 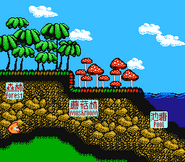 Later reprint by an unrelated distributor.

Another reprint from the early 2000's.